Photograph (above) taken by Luke O'Neill

This 60-day course is a stunning journey through the varying landscapes of Oregon and Idaho.

The Oregon Cascades and Idaho Salmon River Leadership Semester course is the longest course (65 days) offered in the Northwest, and provides in-depth technical instruction while focusing on the interpersonal skills that support strong leadership. You will have the opportunity to escape your usual routine, explore stunning wilderness areas, and enjoy yourself to the fullest. You might bring a friend you enjoy spending time with to make the trip even more memorable. In addition to interpersonal skills like communication, feedback, decision making and goal setting, you will also learn mountaineering, rock climbing and whitewater rafting in some of the wildest and most scenic areas in the United States. Rock climbing takes place at the world-famous Smith Rock State Park. You will learn mountaineering skills in the Central Cascades range of Oregon and practice those skills on summit attempts of local peaks. A 3-day introduction to wilderness medicine with the opportunity to earn your Wilderness First Aid (WFA) certification is also included. Finally, you will whitewater raft on two of the most renowned rivers in the West, the Salmon River in Idaho and the Deschutes River in Oregon. Although there is time for rest and reflection during the course, it is an intense experience: ten weeks of skill development, backcountry living and physical and mental challenges in the most spectacular of outdoor learning environments. Wilderness travel can be challenging, but with appropriate pre-course preparation – using tools we provide – people of various ages and body types can be successful. Arriving as physically fit as possible and excited for the opportunity for personal development will enhance your experience and allow you to take full advantage of the expedition. 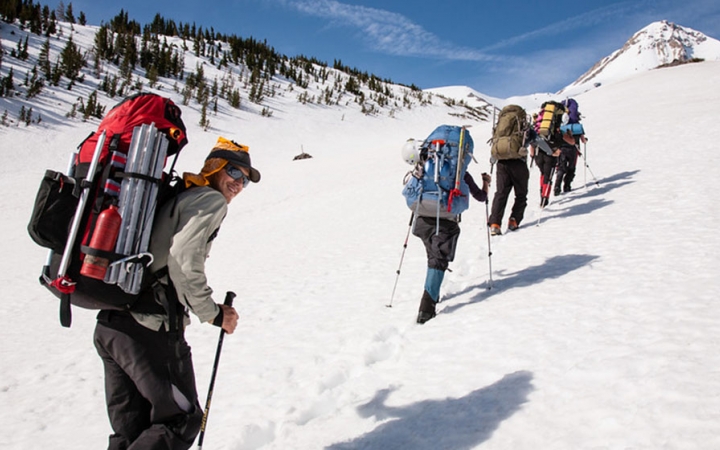 Mountaineering courses move through high mountain terrain and focus on preparation for a peak attempt that may require the use of ropes, technical equipment, and possibly rock climbing or snow travel. Students will start by learning backpacking skills, map and compass navigation, campsite selection, and progress to basic mountaineering skills. The Instructor-to-student ratio is never more than 1:5 during this section, allowing for personal coaching on the physical techniques of mountaineering, as well as tailoring the curriculum to the interests and aptitudes of individual course participants.

Students will travel on the river in four to six-person paddle rafts, and learn to “captain” (maneuver) their paddle raft team through Class II to III rapids. After lessons in basic river travel and safety, students will learn to read currents, anticipate obstacles and scout rapids. Students will also learn river hydrology, swimming in currents, and paddle techniques. There may also be an opportunity for short day hikes.

The Wilderness First Aid (WFA) course is a 3-day introduction to wilderness medicine that combines classroom time with practical sessions. This section provides students with basic instruction and wilderness first aid skills. Students leave this 3-day section with a certification in Wilderness First Aid and the knowledge to manage simple injuries/illnesses in the backcountry. It is a great stepping stone into wilderness medicine and may lead to a desire to take longer, more complex courses in the future.

Outward Bound believes that an appropriate amount of independence is a powerful educational tool. During the travel sections of this course, Outward Bound Instructors purposefully and gradually transfer certain leadership responsibilities to the students culminating with the “Final Expedition.” Near the end of course—if the group has demonstrated the necessary leadership, team problem solving and wilderness living skills—students may have the opportunity to travel without instructors immediately present. Many of our students feel this phase of the course is the most rewarding, as the group learns to work as a team, problem solve, and accomplish a goal independently, while utilizing all the skills they have acquired.

Courses typically end with a Challenge Event—an individual final physical push. This may take the form of an endurance run or triathlon-style challenge.

Service to others and to our environment is a core value of Outward Bound and is integrated into each course. Groups follow Leave No Trace ethics as they engage in acts of service while leading and supporting fellow participants. Designated service projects are coordinated with land managers like the US Forest Service, Bureau of Land Management, and National Park Service to collaborate on land restoration projects. Additionally, students may have the opportunity to work alongside select social service agencies like nursing homes, hospitals, and organic farms. Students see the impact of their actions firsthand, and may develop a desire to continue service in their home communities.

In order for profound learning to take place, students must spend time reflecting on their experience, and Solo is that opportunity. The Solo experience provides an important break from the rigors of the expedition and gives students the opportunity to reflect on their Outward Bound experience. With sufficient food and equipment, students will set up camp at sites of their own, using the wilderness skills learned during the first portions of the course. The amount of time students spend on Solo is based on course length, weather, student condition, age, and Instructor preference. Solo campsites are chosen to offer as much solitude as possible (yet be within emergency whistle-signaling distance of other group members). Most students spend their Solo time journaling, drawing, reflecting, thinking and resting as they process lessons of the course to focus on their goals for the future. Instructors check on each participant at regular intervals, as safety is always a top priority.

Outward Bound promotes character development, leadership, and service in the most engaging classroom possible – the wilderness. In real time, students experience the effects of their decisions on themselves and the other members of their group as they work to complete difficult tasks necessary for wilderness travel. Instructors challenge students to try new things and step outside their comfort zones. They also provide feedback that students implement on course and when they return to their communities.

The Deschutes River is part of the national Wild & Scenic Rivers System, flowing north from the Oregon Cascades to the Columbia River and then on to the Pacific Ocean. Courses generally travel anywhere from fifty to one hundred miles along the Lower Deschutes. The rapids on the Deschutes are rated to class IV, mostly class II-III. The group camps each night along the banks of the river. These regions are the ancestral lands of the Confederated Tribes of Warm Springs and the Tenino nations.

Volcanoes dot the spine of the Cascade Mountains, rising over 10,000 feet above the forests, lakes, and rivers of the surrounding region. The Central Cascade Range is home to the Three Sisters, Broken Top, Mt. Washington, Three Fingered Jack, and Mt. Jefferson. Active glaciers, traces of avalanches, and the volcanoes themselves are the perfect setting for learning the more technical aspects of mountaineering and backpacking. Depending on the peak, your summit attempt may necessitate glacier and roped-team travel. These regions are the ancestral lands of the Yoncalla, Molalla, Kalapuya, Tenino and Confederated Tribes of Warm Springs nations.

Smith Rock State Park is a world-renowned climbing destination that attracts climbers of every ability level. The Crooked River winds its way through the canyon, and to the west, the snow-capped volcanoes of the Cascade Range rise on the horizon. Eagles’ nests in the rocks and the area is abundant with incredible wildlife. One of the most striking features is a prominent spire, Monkey Face. Given the dry and temperate climate, rock climbing is feasible most of the year. These regions are the ancestral lands of the Confederated Tribes of Warm Springs and the Tenino nations.

Starting in Whitebird, Idaho, the Salmon River has created the second deepest river gorge in North America (deeper than the Grand Canyon!) and is also the longest free-flowing river in the United States. Your group will travel over 73 river miles, through the Frank Church Wilderness and ending in Hell’s Canyon. Students will also explore historical and cultural sites along the Lower Salmon including the saga of the Nez Perce, the lives of Chinese miners from the late 1800’s, and stunning Native American pictographs. These regions are the ancestral lands of the Nimiipuu (Nez Perce) nation.

Temperatures typically range from freezing to 70 degrees Fahrenheit. The course area is on the eastern side of the Cascades, and thus tends to be drier; however, rain and thunderstorms are not unusual. Fall weather varies and students could experience snow and wet conditions, especially in the mountains.

SAMPLE ITINERARY
DAY 1
Course Start, welcome and introductions, duffle shuffle, course overview
DAY 2-10
Backpacking Section: Lessons on how to pack a pack, travel in mountain environment, navigation and map reading, camp craft skills, cooking, water treatment, hygiene, travel and etiquette. There is also a focus on group dynamics, leadership & communication
DAY 11-13
Mountaineering: Travel in mountain environment, continue to practice technical and human skills, lessons on conflict resolution, teamwork, goal setting. Opportunity to climb one of the mountains in the course area.
DAY 14-16
Solo; Longer courses have the opportunity for a 3 day two night solo. Length of Solo is up to the discretion of the instructors and will be no longer than a 72 hour period
DAY 17-18
Mountaineering/Backpacking: Depending on group cohesion and interest there is an opportunity to climb one of the mountains in the course area.
DAY 19-24
Whitewater Rafting: Travel up to 100 miles on the beautiful Upper and Lower Deschutes River.
DAY 25
Travel to the Lower Salmon River in Idaho.
DAY 26-29
Whitewater Rafting: Exploration of the Lower Salmon River and Snake River, including cultural and natural history lessons.
DAY 31-33
Wilderness First Aid course
DAY 34
Travel to Smith Rock state park
DAY 35-48
Rock Climbing: Develop knowledge of rock climbing technique and systems, including more technical elements including placement of artificial protection, anchor building and rescue. There may be an opportunity for a short Solo experience.
DAY 48-50
Service project
DAY 50-63
Final expedition. Students are responsible for planning and executing a multi-day expedition with little guidance from instructional staff.
DAY 64
Personal challenge event, de-issue gear, de-brief, course end celebration and graduation.
DAY 65
Travel home 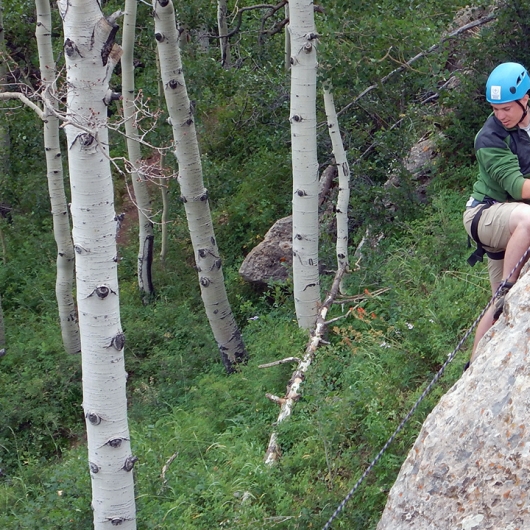